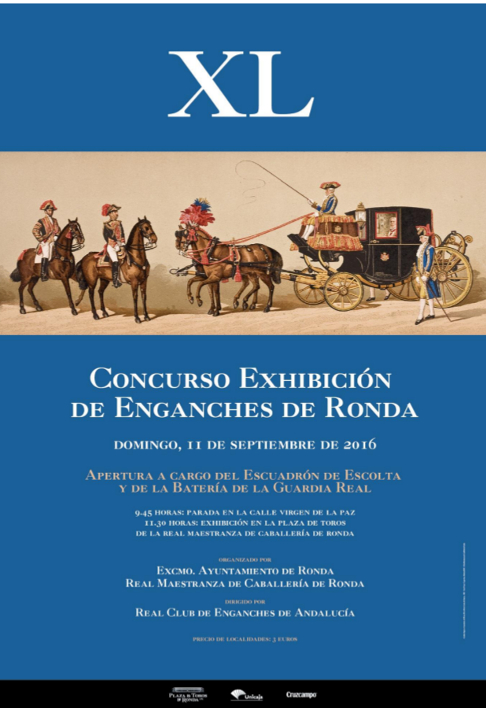 
The competition, organized by the City Council of Ronda and the Real Maestranza de Caballera de Ronda and directed by the Real Club de Carruajes de Andalucia, demonstated the superb quality of the carriages and the excellent skill of the drivers.

The Real Club de Enganches de Andaluca (RCEA) invited twenty of possibly the best carriages in Spain to participate in this show, which was held at the Bicentennial Ronda Bullring on Sunday September 6. 18 of the drivers were non-professional but were all whips of a very high standard.

The carriages remained on display in the street Virgen de la Paz for visitors to see from 10 in the morning until they entered the town square two hours later, where they were judged by the RCEA officials.

The carriage entered by Yeguada SeÃÂ±orÃÂ­o de los Cedros and led by the Daumont, surprised the audience. The carriage is drawn by four horses with two postillion riders on the left hand equines, controlled by a short postillion whip and riding reins. This equipage is preceded by a picador whose purpose is to pave the way for this particular style of vehicle and has two flunkies- in a pulpitillo to escort the Grand Duke.

The event revealed the very high level of the professional coachmen, where the keen competitiveness between them demonstrated the masterly skill of the carriage drivers.

The Gregory Aranda Family was represented by three generations, grandfather, son and grandson, winning the first places in two classes.

One of the objectives of the RCEA is promoting the calesera harness, classical in the region of Andalusia. This way of presenting the harness, is awarded by the RMCR Trophy, considered the most prestigious and best prize. This year it was awarded to Yeguada Francisco Olivera, for his excellent presentation of the calesera hitch, Spanish style harness.

The end carousel with all turnouts on the ground was once again the highlight of the exhibition contest.

The Graduate Hall of RMCR welcomed the prizegiving ceremony, with the following result: