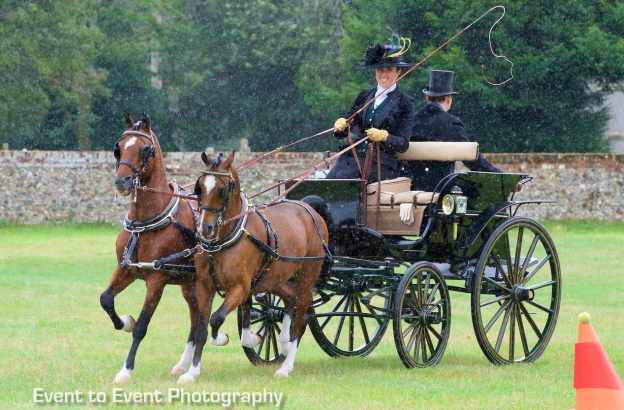 The only UK AIAT event – Euston

It was only the resolve and bulldog attitude of Wally and Eunice Binder that allowed nineteen traditional carriage drivers to gather together (respecting social distancing) on the Duke and Duchess of Grafton’s glorious estate in Suffolk for a CIAT event. It was a CIAT event with appropriate safe-guards but still following the well-established AIAT format and rules but held over only one day.

Stabling was the first challenge for the Binders – there wasn’t any!   Instead, the AIAT enthusiasts were allocated areas in the spacious “stabling area” with suitable space for their lorries and vehicles beside a separate “corral” area for the equines, all well attired for the unfortunate damp weather.

The President of the AIAT, Baron Christian de Langlade was unable to judge because of the pandemic so Colin Henderson joined Richard James and Elizabeth Cartwright-Hignett on the judges' panel, and what a challenge they had, not in finding their winner in the Presentation but in splitting them up, it may be a corny comment but the majority were all winners. The standard is getting higher and higher, judges needing to knit pick to reach a result.

Jessie Dudley Apicella took the Show Championship, winning the Best Harness and also the Best Presentation awards driving her pair of Hackney Ponies to a four-wheeled Ralli Car, and top of her class despite coming second in the cones.

James Jeffrey took the Horse Pair class with his Friesian x Highland to a varnished Dog Cart from Colin Varle’s Wagonette and Roger and Gill Derryman, up from Cornwall, with their Sporting Dog Cart.

In the hotly contested singles classes, Liz Harcombe won the top pony slot with her Canterbury Cart despite coming fourth in the Presentation, her driving skills coming to the fore. James Foley with his Hackney horse Crowside Gay James put to a classical Stanhope gig won the horse singles and took the Reserve Championship in addition to the Best Newcomer. Ben Lawless was the best Young Driver, a clear round but just a few time penalties in Paul Mill’s flowing cones course, pulled him up to third in the horse class.

The Euston event proved that a very satisfactory and enjoyable AIAT event can be held over one day with the three full sections completed, no stables but sadly lacking the hospitality and social element but with a grand collection of prizes and rosettes.

The GB AIAT enthusiasts are most grateful to the organisers, the volunteers, the exhibitors and support crews for ensuring that we kept traditional carriage driving going during these most difficult of times.