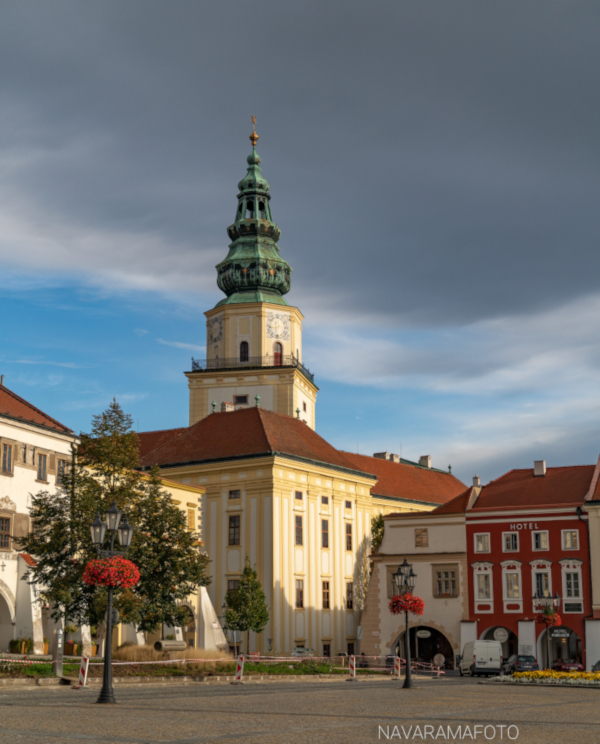 It was a long way...not only to Tipperary but also to the setting up of an Association for Traditional Drivers in the Czech Republic. But all’s well that ends well, eventually the newly established association, under the direction of Dr. Olejnicek, Milan Novak and Lenka Gotthardova, managed to organizing its first CIAT in its first year! And a great success it was, too! 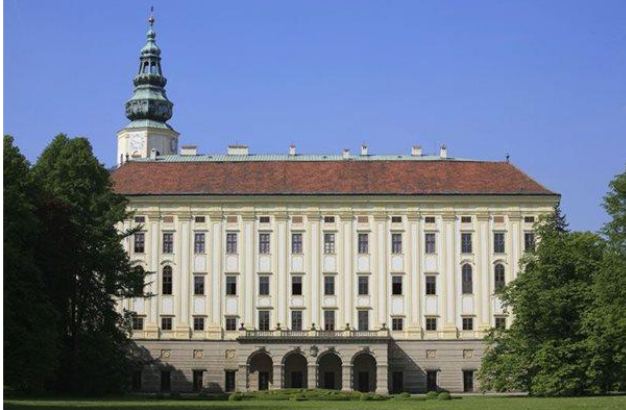 Welcome to a new member in our international AIAT family: the Czech AIAT

As the President of AIAT, it is my privilege to welcome our Czech friends in our international association, as a new national association. The Czechs have a high equestrian reputation, and they have founded their national Czech AIAT section recently.

They have shown interest in AIAT activities since a couple of years. We are aware that there are excellent Czech whips, and we do hope that we can welcome them at our various CIAT occasions all over Europe.

They are going to hold a beautiful CIAT with 21 turnouts being registred already, to be held at Kromeritz on September 28/29 this year. It is quite a striking result having this quantity of participants for the first event like this. Some Polish turnouts will give international flair to the first Czech CIAT, and we can be confident to quickly integrate the newly founded Czech AIAT section into the international AIAT family, with their tournouts as well as organizers of international tournaments. 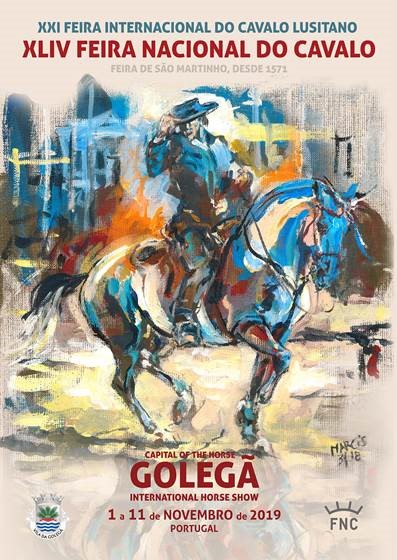 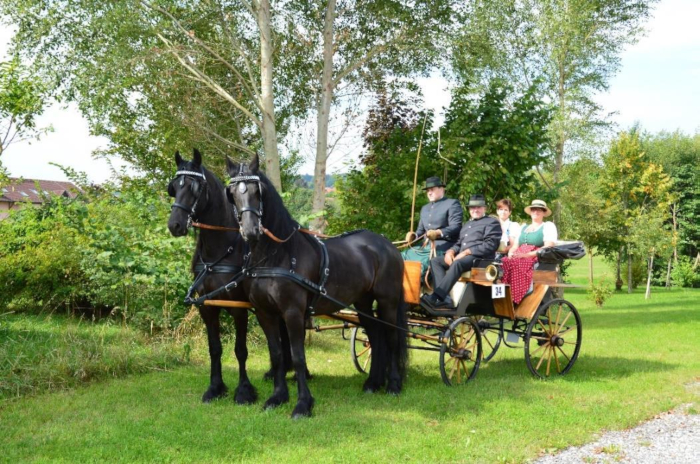 On Friday, August 16th in Bad Ischl, Austria, there was a parade of unusual character for this area. Martin Achleitner, Felix Rothauer and their team organized a cavalcade of traditional turnouts through the town centre. They made short stops in the Imperial Villa park, in a prominent area of the main promenade, and in the park belonging to the town’s spa. Here the turnouts were presented and their particular characteristics explained to the public by popular experts... 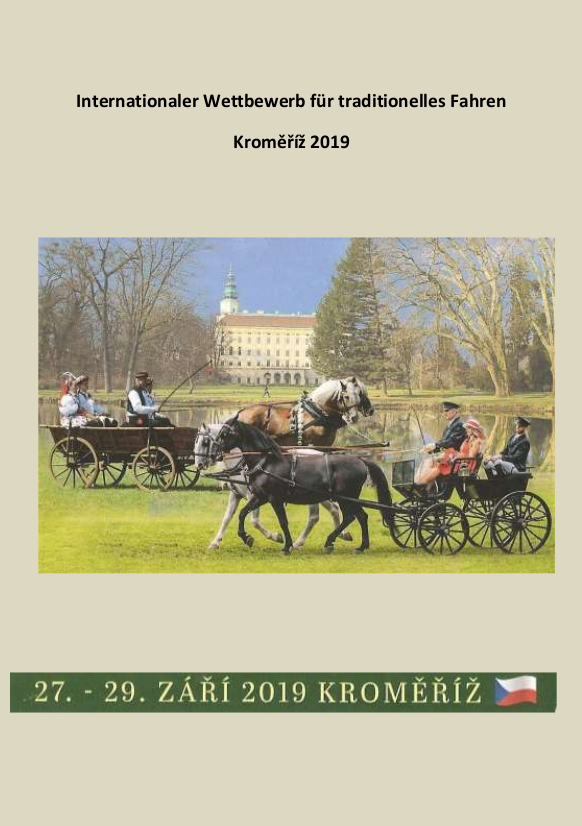 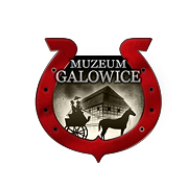 AIAT-Meeting in Wroclaw 2019, the visit to the Carriage Museum at Galowice

When entering the cobbled court through a beautifully restored baroque gate, built in 1721, the visitor walks straight up to a large historic building of well-balanced dimensions. It is a half-timbered structure with small windows and a double-hipped roof. At first sight the visitor realizes that it has not been used to live in, though it was well designed. The narrow-gauge rails leading from the road through the gate into the building hint of an earlier warehouse belonging to a large noble estate in Galowice; the remains of the stately home still recognizable nearby. A commemorative slab put up by Emil von Lieres und Wilkau in 1888 is evidence of the family who formerly owned the estate.

Realizing the beauty and quality of the building Tadeusz Kolacz, an entrepreneur from Wroclaw, bought the building and diligently had it refurbished.The building was exactly what he was looking for, a spacious home for his carriage collection, Muzeum Powozow Galowice near Wroclaw. Read more ... 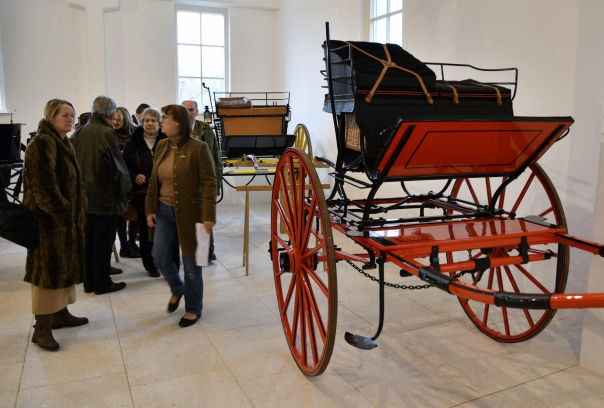 The Annual General Meeting of the AIAT was held on the weekend 9th, 10th, 11th March 2018 in Bernried, on Lake Starnberg, Upper Bavaria. Usually the meetings are held in early February well before the beginning of the driving season. Bernried is situated near the Alps, 600 meters above sea level and the rough climate of Upper Bavaria often has snow even in April. The organizers of the meeting – and the participants – were lucky because this weekend the temperature rose up to about 10 degrees centigrade, yet the weekend before that had suffered a heavy frost. The Judges Clinic was held as usual on Saturday morning for the benefit of the international judges. 17 turnouts of various quality were turned out to be judged. The marks given were compared and then analysed in a meeting the following morning. The highlights of the Annual General Meeting were, however, the visit to Rudolf Stief’s private carriage collection near Augsburg in the afternoon and the festive dinner in Höhenried Castle near Bernried in the evening. 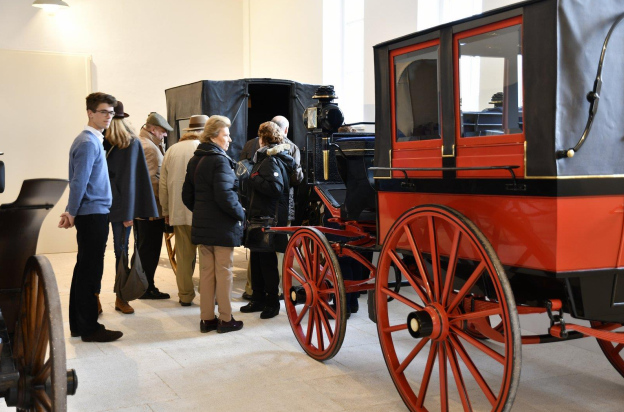 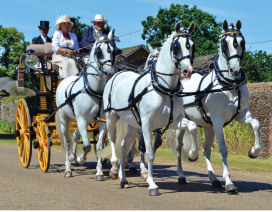 A wonderful range of turnouts from across the globe and a perfect setting on the Royal Estate. Lester Dagge reports.

AIAT Great Britain hosted its premier Attelage de Tradition during the last weekend of June at the Sandringham Festival of Carriage driving in association with the Coaching Club and British Carriagedriving with grateful permission of Her Majesty The Queen.
With an illustrious field of 30 entries, the event basked in glorious sunshine with competitors taking part from all corners of the United Kingdom as well as guests from the Netherlands and USA. “This was our second year here at Sandringham” explained event organiser Rosemary Neale “with a noticeable improvement and a display of the very highest standards. Attelage de Tradition is all about preserving and using our heritage in the best way possible, by driving the carriages in...

Unfortunately we have to cancel the historical driving competition (CIAT), that was planned at the State Stud Celle from August 26th-28th. There was another strangles-positive tested mare in our stock, which caused the prolongation of our quarantine to prevent the spread of this disease.

We deeply regret this step and ask the participants and visitors to be sympathetic about our decision.

In any case this successful event will be continued in 2017. 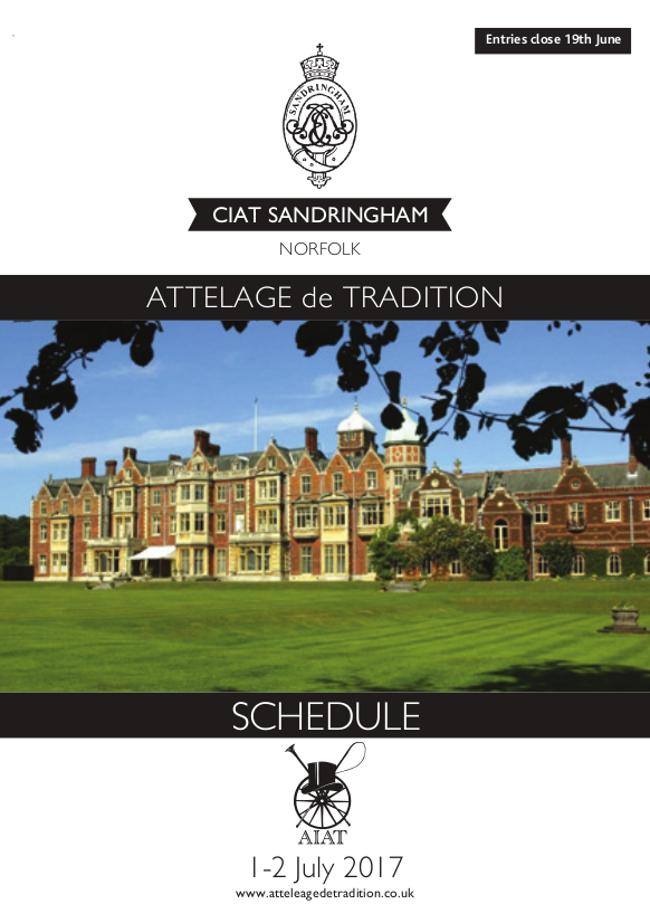 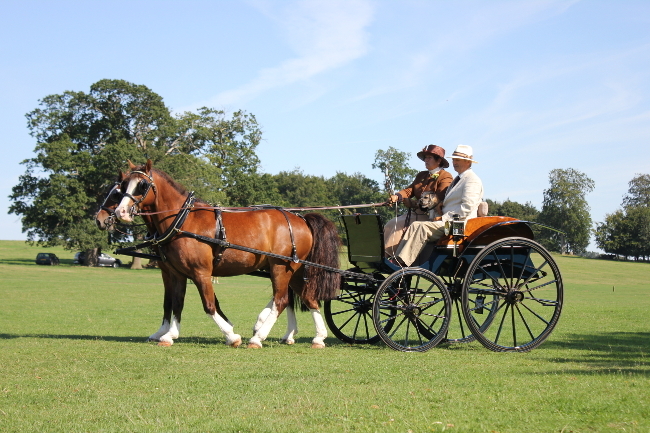 Attelage de tradition is fast gaining popularity in the UK, and with four competitions to enjoy this year we explain what’s involved.


Firstly let’s get one thing straight, Attelage de Tradition is NOT showing! It is a competition in its own right, the fusion between driving trials and traditional private driving. It was created about 20 years ago to help stem the dramatic demise of original traditional vehicles that were being abandoned and castigated to the back of barns, no longer wanted in favour of modern competition vehicles.

Increase in popularity
Today, Attelage de Tradition is becoming increasingly popular right across Europe, particularly in France, Spain and Italy where events are experiencing record entries of up to 90 traditional turnouts at each event. Contrary to some beliefs, the standards on Europe are far outweighing anything seen in the UK, and that is thanks to the popularity of the competition. With its origins created in France, the competition format is strictly set and governed by the AIAT (Association d’International d’Attelage de Tradition) so any competitor in Europe can be assured of the same criteria at any event in any nation. Currently, 16 nations subscribe to the AIAT, offering 27 CIAT Attelage de Traditions through the year, from February right up to December.
In the United Kingdom, 2017 will see four affiliated CIAT Attelage de Traditions; at Glamis Castle in Scotland, Sandringham in Norfolk, Erddig in Wales and Euston in Suffolk. The Erddig competiton is a step forward, working with the National Trust, the country’s largest landowner to hopefully pave the way for other properties to welcome carriage driving.
In the last six years, Attelage de Tradition in the UK has seen a steady growth in interest. Picton Castle in Pembrokeshire, despite its far westerly location, was the first CIAT affiliated venue hosted by the Dyfed Carriage Club, and, thanks to the support of enthusiastic club members, helped Attelage de Tradition gain a foothold in the UK. What Picton taught us was that this new kind of event to the UK beats to a different drum from everything else. Attelage de Tradition isn’t just about carriages, horses and turnout, but a social weekend break for its participants. Competitors travelled far and wide to enjoy the event and with the treat of a spectacular venue, relaxing atmosphere, the beautiful original turnouts and plenty of socialising made it a real destination event. This popular event saw returning competitors come back each year with vastly improved turnouts, newly acquired original vehicles and markedly enhanced standards. The residual effect also inspired a new league of interested participants to take up Attelage de Tradition with around eight new turnouts being planned this year.
Sadly, Picton has now completed its tenure with Erddig flying the banner for Attelage de Tradition in Wales, but from that we have learnt a lot to offer an accomplished and enjoyable competition programme. 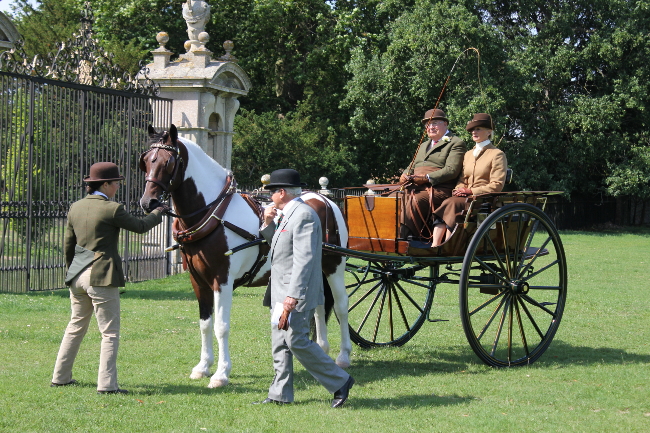 Competition format
The Attelage de Tradition competition format is quite simple. It’s open to any traditional vehicle that has to negotiate three stages: a standing presentation judged three times by different judges, a road drive (Routier) where you will negotiate five simple tasks (Difficulties) and then a final cones course over a gently sweeping optimum timed course (Maniabilité). All stages are heavily scrutineered and scored, and it’s only until the very last competitor has completed the cones course that the prize winners are revealed. There are a number of classifications in the competition for the variety of turnouts, including singles, pairs, tandems and multiples for all equines. All competitors receive prizes, and these are often sought after plaques and goody bags.
As the competition is about promoting the use of traditional vehicles, ANY traditional vehicle is welcome, including country vehicles, trade and coachman driven. It is not uncommon to see teams of six competing at Attelage de Tradition events on the continent. Those vehicles that are often out of favour in the show ring will in fact gain favour at an Attelage. There is a preference for vehicles built before 1945 as they will gain more points at Presentation over a modern reproduction. For example, a 1905 varnished game cart could gain a maximum 180 points over a 2016 reproduction Mills Phaeton that would only gain a maximum of 60 points. This promotion of original vehicles has seen a healthy rise in their value on the continent, in total contrast from the UK where values have plummeted in recent years. The work of European artisan carriage related craftsmen has thus been encouraged busily restoring original vehicles.
What is important is that all vehicles that take part have to be in a safe and roadworthy condition to negotiate the 15km road drive. Individual turnouts will be judged on the correctness of the complete equipage including harness, horse carriage and passengers (this is a dressage half topper free zone!). The rest of the competition is down to driver skill, so all turnouts share the same scores. Whether you have a fast paced trials horse or a dinky Shetland, you both share the same chance of winning, thanks to the class and scores’ structure. 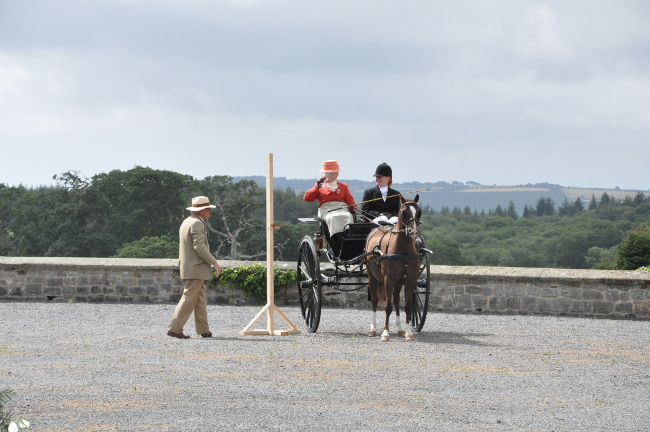 A warm welcome to all
The principles of the AIAT are shared with the British Driving Society where safety and best practice carriage driving is a prerequisite of the competition. The competition runs in tandem with the work of the BDS and openly welcomes BDS members to take part at any AIAT event in Europe. For 2017, the BDS has stepped back as a paying affiliate to the AIAT opening the competition up to non BDS members such as British Carriagedriving, The Coaching Club and the Road Club. This should allow some of the magnificent coaches and coachman driven turnouts to take part at the affiliated events. The BDS are meanwhile free to encourage their members to take part in their own Carriage Driving Challenge events with modern exercise vehicles, where a number have already been inspired to migrate up to traditional vehicles and take part in Attelage de Tradition events. (Remember a vintage carriage and harness can still cost less than a new modern competition carriage!)
So, in a era of uncertainty with dwindling private driving turnouts in the show ring, it’s encouraging to see a new generation revitalising their interest in traditional carriage driving and raising standards back to where they once belonged. We look forward to seeing you this season! 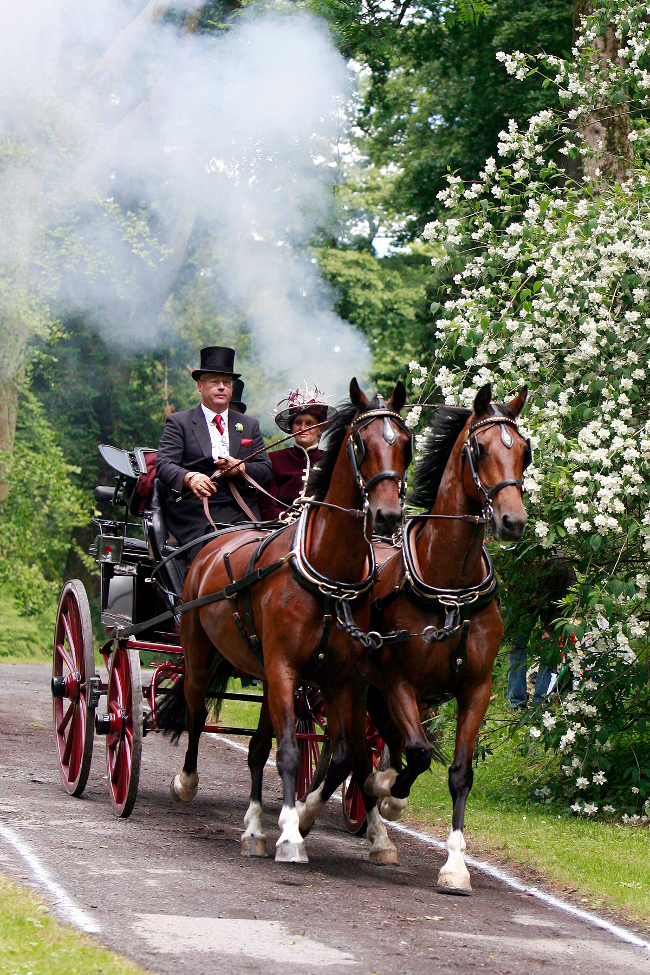 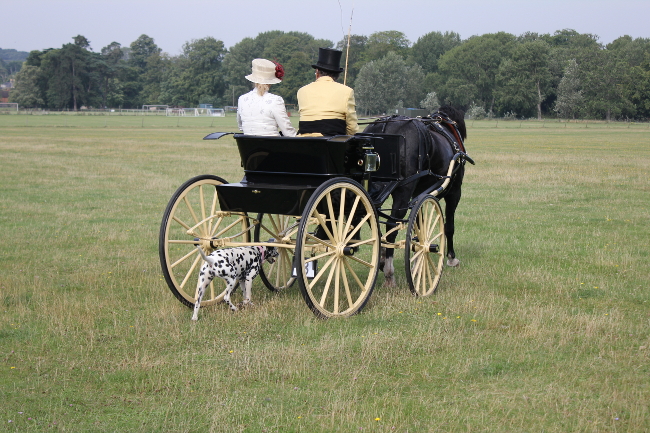