Daisy Princess von Pless, née Cornwallis-West, was probably the most celebrated beauty of her time. When she married Hans-Heinrich XV. Prince von Pless, she was presented a string of pearls the price of which was one million goldmark. It matched with her clothes as well as with her lifestyle,as her husband was one of the wealthiest noblemen in Germany. Her parties at Ksiaz Castle were so elegant and much sought after that even kings endeavoured to obtain an invitation.

Though she died in 1943, the flamboyant Princess is still well remembered by the people of Silesia and therefore they took her as a model for the driving festival that took place on 20th and 21st July 2013 at her former home, Ksiaz Castle. Many of the turn outs that appeared in the park of the castle reminded the lookers on of the days of the Princess: Horses with much presence and action, stylish carriages and drivers and passengers in garments well adapted to the turn outs.

Fifteen drivers had registered for the CIAT. One participant came from Germany, one from France and even four participants came from Swizerland. The horses were accomodated in the well designed and well kept mews of the castle (today a National Stud), the drivers in a five star hotel nearby, a very practical arrangement.

On Saturday the turn outs were presented in the gardens of the castle where they were judged by Mr Huber (D), Mr Novak-Zemplinski (PL) and Baron de Langlade (F) who was the technical delegate of the AIAT and chairman of the jury. The judges were very pleased with the efforts of the drivers who had tried hard to set an international standard in their turn outs. These efforts were pretty ambitious as the concours was the first CIAT ever held in Poland. Several turn outs were town turn outs that should be coachman-driven but were not, some turn outs had obviously a distinct FEI-driving background. But all their horses were well kept, well trained and fit for their job and the drivers had a feeling for and interest in elegance and a stylish appearance.

The following Sunday was a very hot day. Fifteen kilometers to go at thirty degrees centigrade is a difficult job for the horses but they managed to do it as well as the drivers were able to negotiate the PCs skilfully.

The stud has a show ring with terraces where in the afternoon many hundreds of spectators had gathered to see the cone driving. It turned out to form a challenge for some of the drivers but all of them were able to reach the finish – no matter how many balls were down.

The prize giving in the end under the trees overshadowing the show ring was a scene worth painting. The parade of so many well bred horses, stylish carriages, elegant clothes and –last but not least – beautiful ladies on the carriages caused an uproar of enthusiasm from the audience. They clapped their hands and felt set back to the days of Princess Daisy von Pless when the traffic of elegant carriages in the ground of Ksiaz Castle was the order of the day.

Hoping that you will be able to attend this personal invitation and take part to this friendly
event, we send you our warmest regards.

By A.J Sigleton and Jennifer Singleton

The location of this CIAT was the Nordrhein-Westfälisches  Landesgestüt.  A beautiful place for this event with good facilities for the competitors.

Most of the competitors (Germany, Belgium en and The Netherlands) arrived on Friday with their carriages and horses. In the evening they enjoyed a diner composed by local specialities brought by their selves.

On Saturday morning the competitors started with the presentation, where after they started for the Roadtrack, within 5 obstacles:

At the end of the track there was a pick nick near Schloss Harkotten.

After the pick nick the competitors could continue their route on their own, back to the Landesgestüt.

Saturday night there was a well  delicious dinner, served between the stable of the cold blooded stallions. It was a nice evening and everybody enjoyed the food and drinks.

On Sunday morning the competitors started one after one for a little trip with a sherrystop at Schloss Freckenhorst. The neighbourhood of Warendorf and the Altstadt are nice to drive through.
At the Landesgestüt cone driving was the last part of the competition. The Sun was shining and lots of people came watching the beautiful  carriages and horses.

At the end of this great afternoon all competitors lined up for the ceremonie.

Urbain van de Voorde (Belgium) was the general winner of the competition.

The organisation could be proud about this well organized event with a beautiful location.

The CUTS 16th International Traditional Driving Competition will take place in the park of the Château and in the beautiful surrounding countryside. This well-known event attracts numerous competitors and public – between 10 000 to 15 000spectators each year – coming from all over Europe.

The aim of the organizers of this amicable competition is to provide an enjoyable week-end for drivers from near and far as well as a memorable show with a unique simple, family and very elegant atmosphere altogether !

The public is very keen of this form of competition mixing tradition, beauty and elegance with performance as the turnouts must cover a 16 km track.

The competition is open to drivers of horses, ponies and heavy horses … sometimes donkeys with their original carriages and presentation harness.

It consists of three phases :

It is a living memory and an unique show ! 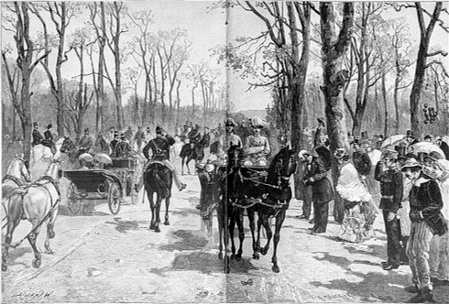 Carriage procession on the Prater in Vienna on  May, 1st ,1886

Praterfahrt in Vienna on May, 1st

The festive trotting of horses, by which the people of Vienna welcome the beginning May, has a lot of historical background. Even in the days of the dukes the beautiful place on the Danube celebrated the Festival of  Violets, in which even the sovereign took part. That custom has disappeared, as so many other things, but it was replaced by the tradition of wandering to the Prater on May, 1st, that vast park in that cheerful imperial city.

The drawing on top of this article shows a snapshot of this year’s Praterfahrt. Carriages and gentlemen on horseback and pedestrians romping about the avenue, the very center of the scenery being the imperial state carriage. The most ditinguished persons walk next to working class people, you can see an army officer undisturbed by the private next to him, a lady of fashion and a pauper; even the Strizzi, the typical Viennese character with a cigar in his mouth and a misshapen cap on his head is there.

In the old days the scenery was brighter. The Austrian aristocracy took pride in parading with the most stylish carriages, horses, footmen and – we should have mentioned it first – the most fashionable ladies’ apparel.

Runners went ahead of the carriages. Sad to say, their jobs were abolished in the year 1848. Famous horsemen, as Count Sandor, performed their feats. The fact, that the whole imperial court app

eared there, formed the main attraction for the public. The emperor, the empress, all archdukes and archduchesses of Austria took part in the Praterfahrt. The emperor’s father, archduke Franz Karl, who died eight years ago, was wont to parade there in a chariot and six with outriders. In the Kaisergarten, an area of the Prater reserved for the imperial court, he used to give a dinner for the whole of the imperial family on May, 1st.

Still today May, 1st, offers an attractive, colourful spectacle, which gives evidence of the fact, that Vienna has everything necessary fo such a cheerful drive into springtime: the beautiful ladies, the merry people, who are in raptures and “don’t permit sad feelings...” - as the folk-song goes – whatever their fate may be.

This article is taken fromDie Gartenlaube (1853-1944) (The Garden Bower). It was a magazine, very popular with the middle class in German speaking countries. It’s articles dealt with everything: geography and industry, society and technology, poetry and gossip. Even the best selling novels by Hedwig Courts-Mahler and Eugenie Marlitt were published first in Die Gartenlaube. The 20th century looked at the most successful magazine in a very condescending way for its good liberalism and philistine views.