The 2017 AIAT AGM in Copenhague

The initials “AGM” often creates an immediate “turn off”.  Not when it’s an AIAT AGM involving a weekend at a special location, in the company of a friendly and enthusiastic group of folks and organised by the Selskab for Traditionnel Hestevognskorsel I Danmark lead by Henrik Koier-Andersen.

This was the case in the first weekend of February when delegates from the 14 nation family of the Association International d’Attelage de Tradition met in the royal historical city of Copenhagen Denmark. The 91 traditional carriage driving enthusiasts centred on the Phoenix Hotel, in the town centre, on Friday evening, to renew acquaintances, meet new friends and enjoy a welcoming buffet and drinks. The talking and camaraderie continued into the early hours! 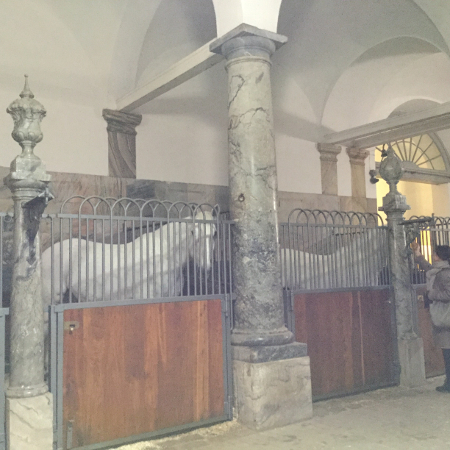 Saturday was a typical cold Danish February morning, not so in the mind of the delegates who enjoyed a fascinating visit to the Danish Royal Stables at Christiansborg, directed by the Danish Crown Equerry, Mr Per Thuesen. This is one of the few remaining working stables in Europe, and the home of the Danish Royal Kladruber State horses.  The tour included a visit to the magnificent Royal indoor riding school built on the style of the Spanish Riding School’s riding hall.   Then invigorated by very generous glasses of appropriate spirits the judges and technical delegates were put to work while the ladies were given a tour of the stunning Christriansborg Palace. 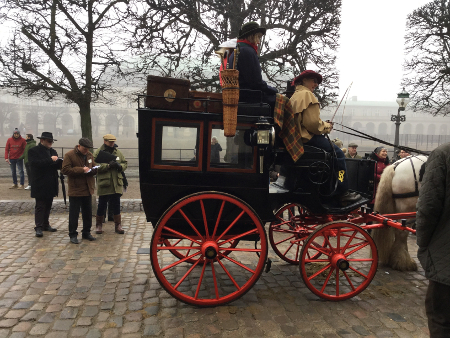 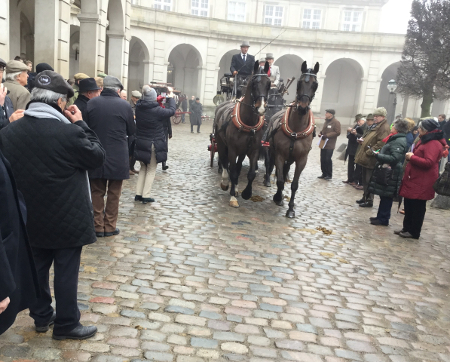 After the exhibitors had come before each of the three judges, the AIAT President, Baron Christian Langlade (FRE) oversaw the delegates as they also assessed the turnouts, discussing each turnout to compare judging standards as an educational and learning exercise.   An interesting and worthwhile process.

During the formal judging the AIAT were honoured by a visit by HRH Prince Consort Henrik who took a great interest in the appraisals of each of the three judges, both flattering comments and the not so flattering!   His Royal Highness’s participation highlights the interest he has in traditional values. 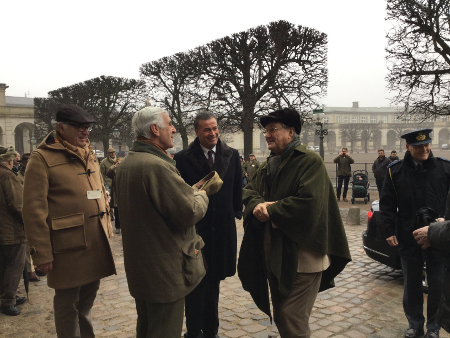 Delegates then retired to the Royal coach house to view on a big screen a slide show of all the morning’s turnouts (photographs used were taken during the morning) to enable the three judges to point out good, and debateable points on each turnout.  This style of participation by all the delegates generated an interesting and constructive discussion in a jovial and friendly atmosphere. 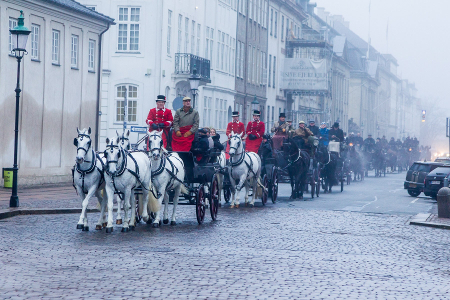 A Royal Welcome
After an excellent lunch in the royal coach house, (sitting at tables amongst the carriages), delegates were invited to take seats in one of the 12 carriages, wagonettes, roof seat brakes etc assembled in the Royal Mews court yard for a tour of old Copenhagen.   The carriages passed numerous historical buildings with magnificent imposing architecture, including the iconic “The Little Mermaid” the bronze statue inspired from the fairy tale by Danish author Hans Christian Andersen.   It was a unique and special experience for us all when the carriages passed the Royal Palace and HM Queen Margrethe II and HRH Prince Consort Henrik were at one of the Palace windows to greet and wave to us. We also saw the Palace sentries changed guard.

After a cup of tea back in the Phoenix Hotel (especially for the British!) and a change of clothes, on to the Odd Fellow Palacet for a black-tie dinner in the spacious dining hall. This provided a great opportunity to exchange views and opinions of the international traditional carriage driving circuit while experiencing a delightful Danish gourmet dinner. 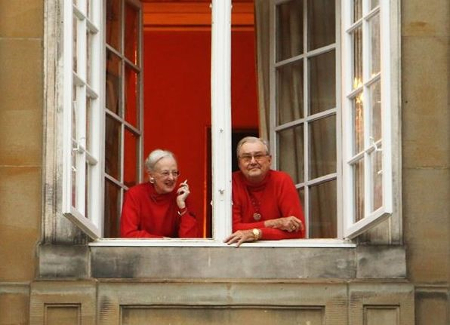 After a cup of tea back in the Phoenix Hotel (especially for the British!) and a change of clothes, on to the Odd Fellow Palacet for a black-tie dinner in the spacious dining hall. This provided a great opportunity to exchange views and opinions of the international traditional carriage driving circuit while experiencing a delightful Danish gourmet dinner.

Sunday started with a tour, through Old Copenhagen, this time by motor coach, to the Frederiksberg Slot, a magnificently restored old palace now the home of the Danish Military Officers Academy where we received a very warm welcome from the principle of the establishment Major Kim Birger Reisz.  He gave us an interesting insight into the history of the Palace and its current role.

The AGM and more
The tour was followed by the focus of the weekend, the AGM.  After the formal business of the meeting and the re-election of the comite a lively debate ensued mostly on the amount of penalties awarded and/or possible elimination during the cones phase of an CIAT competition.  It was resolved that nothing materially was changed. The number of events being offered during the coming season, over 65, indicates the popularity of CIAT format competitions in 14 countries. 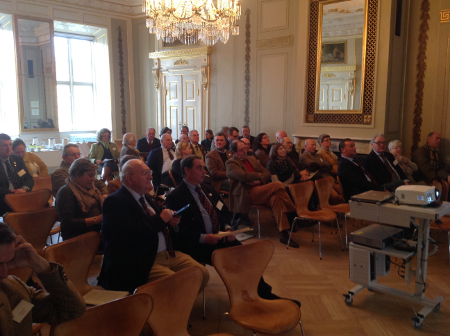 Next stop, after a buffet lunch, was the Carlsberg Brewery where we enjoyed a drink of Carlsberg in the stables, watched by the brewery horses. These horses were bred originally from the native Jute utility horse crossed with a Shire stallion some 100 years ago.  This produced a very stocky chestnut with a blonde mane (a glass of lager with a blonde head!). Carlsberg still use the horses for delivery of their lager to Old Copenhagen. 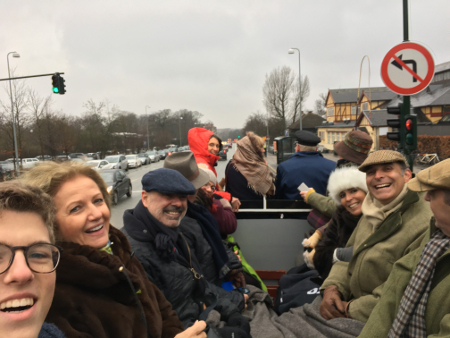 A packed, interesting and happy weekend thanks to the exceptional organisation of our Danish friends, headed up by Henrik Koier-Andersen, the presence of the Danish Royal family, the hospitality of the Royal Stables and the friendly, jovial company of traditional carriage driving folk – a perfect recipe.

We look forward to the 2018 AGM possibly either in Poland or Germany. 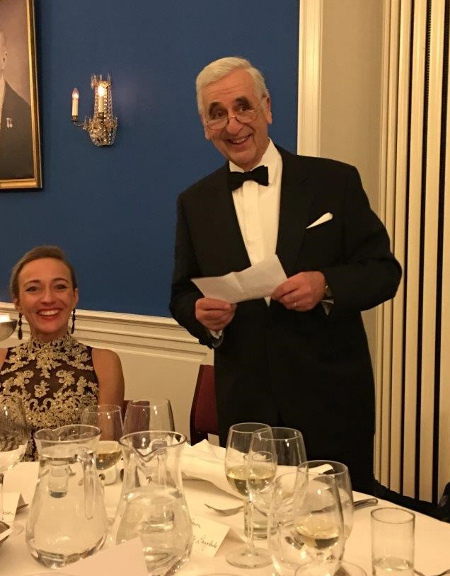 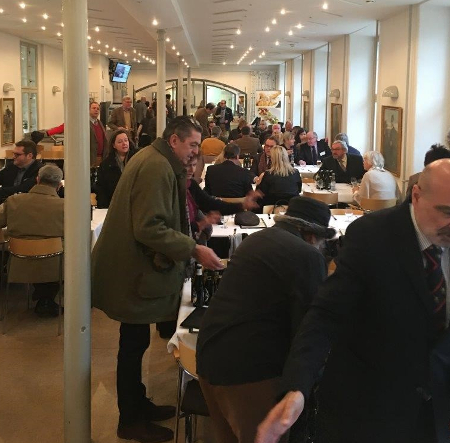 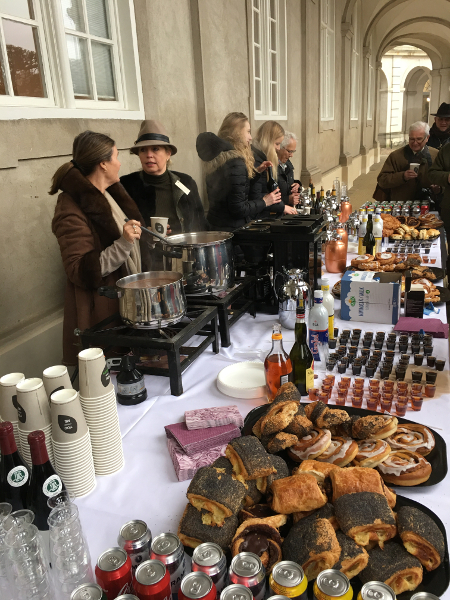 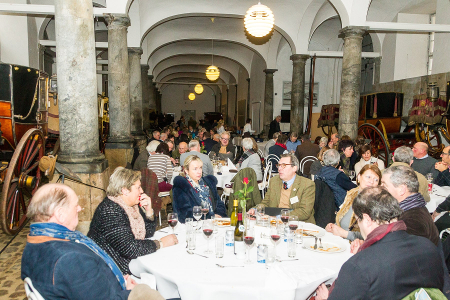 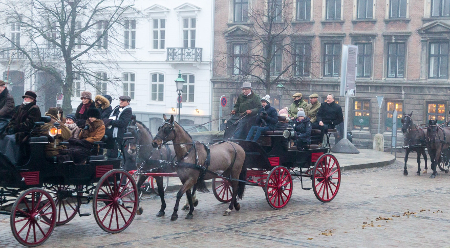