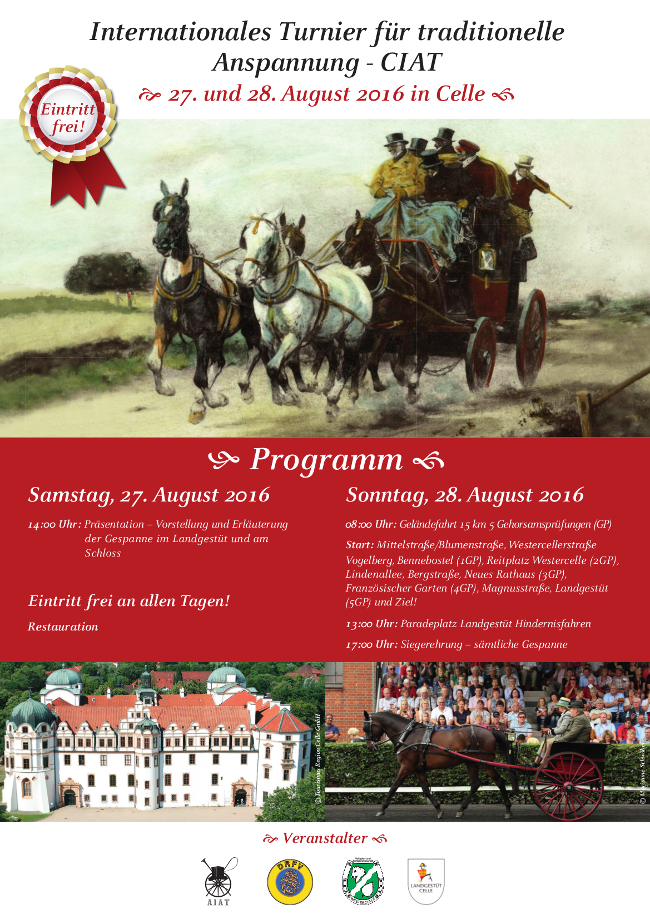 Yet another beautiful edition of the CIAT at Celle, generously welcomed by Dr Brockmann, director of Landgestüt and his wonderful team of Landgestüter, in the magnificent environment of the stud grounds.

Thanks to Günzel, Count von der Schulenburg, and his close guard of helpers, the organization was impeccable! Naming all those who helped would be fastidious, but we well know that such an organization entails much work, friendship, generosity…

The number of participants having been limited for space reasons, forty-four turnouts were present, of which twenty-nine were German, and much more numerous than last year, delighting the organizers! Four Dutch turnouts, three Belgian, one Danish, one Polish and one Swiss completed the list.

On Friday evening everyone got together for the "Dîner des Nations", where specialties from the respective countries of the drivers, as well as a delicious goulash could be tasted.

The Presentation took place like last year on the Saturday afternoon: two judges in front of Celle Castle: Christian de Langlade (F) and Raimundo Coral Rubiales (E)- and the third judge Hartmuth Huber (D) on the main arena of the stud grounds. The global conclusion was unanimous, “the quality of the turnouts has progressed without question and attained a very good level”. Dr Brockmann and Mark Jurd (GB) delivered a fascinating commentary concerning the different teams, communicating their enthusiasm to the numerous spectators gathered in front of the Castle.

Sunday morning a big storm accompanied the departure of the Road track during at least an hour and a half! The poor early starting drivers were drenched, the others were luckier, but all, on the whole did a very good tour in the countryside around Celle including difficulties such as a one hand loop, a rein back, drinking a glass of excellent Sekt, etc…. A lovely course!

During the afternoon, Cone-driving was fluid but technically difficult in the Main Arena with 25% of the course without fault.

All in all we have observed that the global level of the Germans has risen considerably, as well as their interest in "Attelage de Tradition", and that as a consequence they have won in four categories: Friederich Hohwind (poneys), Andrzej Szewczyk (single horse), Bernd Schnur (Horse pairs),Matthias Pfeiffer (Horse team). Geert Bongers (NL) wins the Tandem class ;

Andrzej Szewczyk is the overall competition winner with 15,08 penalty points ;

Germany wins the Nations Cup of the AIAT which rewards the country with the two best drivers with the best total score, that is to say Andrzej Szewczyk and Bernd Schnur.

Global results are below:

Again, well done to all those who put so much time and effort in organizing this competition, in sponsoring it, in participating in it as drivers, in coming as judge, sometimes from far away and for free, as is the rule at AIAT, in order to make all together this wonderful Traditional Driving Meeting such a success ! 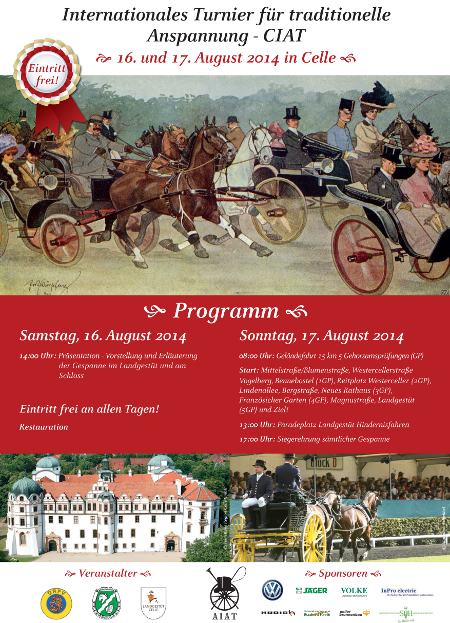