Restoration and conservation - By Dominique Posselle

The advice which follows is the result of 25 years of experience. Of consultation and comparison and observation, it is in effect difficult if you wish to establish rules where only good taste and fashion is the requirement. 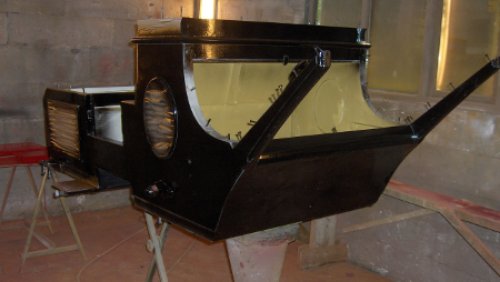 The dismantling of the vehicle

All the metal parts need to be cleaned and the rust removed and then treated and primed ready for assembly. The springs need to be done leaf by leaf.

As one does not use a blowlamp but a variety of abrasives and then follow word by word the advice of FLEURY in the book entitled the 'the painting of carriages' one has to admit in conclusion that after much discussion between several restorers over the years that actual restoration is a compromise.
We have to find and use what is available today; fillers and paints and varnish, no polyurethane.
The first operation is the application of primer and fillers. Then Sand papered down with the first coats of paint being slightly thinner. Sanded down again and then more coats applied until the desired result is obtained.
Important. The sand paper used to start with should be of 100 to120 grain, and then followed by wet and dry sanding using 240 grain to finish in 1200 grain. Washing off with a sponge between each rubbing down.

Reds and yellows were favoured especially on sporting carriages making touching up easier . All colours are acceptable. In Louis Philipe’s time, the colours were very vivid and the mail phaeton from UZES was painted orange with cream lines .In Napoleon III’s time the carriages were much darker with blues and greens and the lines in assorted colours .Otherwise family carriages were often their own colours. But it is up to you.
The fore carriage with its blocks , wheels, shafts, the pole, splinter bar and the undercarriage are traditionally the same colour, the axles can be the same or black .All the bolts such as those in the springs must be checked and replaced if necessary, better if painted black. The metal work is usually painted black as it in the UK and the USA.
There are a few exceptions where the body is black or the panels picked out in another colour and the mouldings painted black as can be found in the rounded seat of a phaeton.
Once the paint finish is to your satisfaction, that is to say a uniform colour with no blemishes the lining may be painted followed by varnish of three coats with wet and dry sanding between each coat.

In Napoleon III times the carriages were heavily lined with a broad strip in the moulding bordered by two fine lines of the same colour. Sporting vehicles were presented in a more sober fashion with a line on each edge of the wheel and the hub with the spokes sometimes on the inside as well as the springs and the metal work and on the shafts and splinter bar and so on . Where the dash board and the wings are wooden they will be black . When panels are lined they follow the mouldings.
In France the shaft furniture etc is normally painted black and if of bright metal in nickel silver (MAILLECHORT) not brass. The same for the pole head in burnished steel or nickel plate (stainless).

This varies depending on the type of vehicle. Woollen cloth, black leather, sometimes green or maroon Bedford and whipcord, even heavy velvet was used to cover the cushions, the backrests and other parts of the upholstery.
The Americans often use a type of carpet or rug material for their coaches, dog carts etc to serve as upholstery. This can be obtained at a very high cost and gives a good effect and are of French origin
Satin and silk are reserved for carriages used for festivals and galas as well as closed carriages such as landaus and broughams and the carriages with 8 springs.
Pigskin is very resistant and is the reason why it was used in omnibuses, hunting phaetons as well as for the upholstery on the outside of coaches.
The backrests are covered in the same material but can be of black leather if not the same colour as the cushions. The cushions are always buttoned and stuffed with hair or a vegetable material (or substitute) never plastic foam.
Carriages such as Victorias, broughams, omnibuses and coachman driven vehicles have a box seat whereas sporting vehicles have the drivers cushion held in by straps.
On the floor there should be a covering of linoleum in black or caramel, at one time all carriages were finished thus, the linoleum was nailed and glued and covered with a rubber mat which is removable but held in place by bigheaded screws; there should be drainage holes lined with brass in the flooring.
Pieces of linen or other cloth suitably prepared can be painted or decorated and even false cane work used around the back of gigs and phaetons. The pole can be padded and filled with straw on two places about 25cms apart.
The shafts are also trimmed in black leather, for about 55cms with a further covering of leather where the Dees for the breeching are fixed with sometimes a second set on each shaft for the trace carriers. The swingle tree is sometimes covered at the tips to protect the paintwork.
The rails of metal surrounding the seats and so on this can be varnished for protection.
The patent leather of today is not the same as that formerly available and advertisements refer to leather varnish. The patent leather of today is obtained by a process of plasticisation.

Hoods are usually of leather or of heavy linen (sailcloth) .The material we call leathercloth is definitively unsuitable. The work has to be done by a specialist.

Often of made of wood depending on the quality of the vehicle, covered in leather on a metal frame.
Leather can be used to cover the wings in the same fashion as the dashboard.

Coaches or Drags were equipped with a clock on the footboard and a lamp in the middle of the footboard . They would also have a spare whip attached to the back rest of the seat.
The handles for passengers to mount may be covered in leather. A whickered basket is often used for the carriage of umbrellas parasols etc and another perhaps of leather for the horn. The spare swingle trees are attached behind the grooms’ seat and should be two side bars and one main bar.
A ladder in wood is also carried for passengers to mount.
During the day sometimes the lamps are carried in the boot and replaced by 'wooded mushrooms' in the lamp brackets.
It is recommended that the axles are checked every two years depending on their use as the leather washers need to be checked and lubricated, motor oil can be used, even sump oil
Grease should be used on the turntable of the forecarriage and on the perch pin.
It is said that carriages were often re-varnished every year. All the touching up being done before varnishing but if the colour is to be changed all should be well rubbed down beforehand .
The life of the paintwork is not eternal and depends on the care and storage and those vehicles near to the sea suffer more than others.

Useful for the work are the accessories, which will complement the carriage. The whip holder can be fixed vertically to the dashboard, the more elaborate has two positions may be carried at an angle attached to back of the seat .
For vehicles with a footboard the whip socket is of metal with a rim and covered in pigskin and attached with straps to the seat rails often to be found with three springs inside to keep the whip in place and as with all whip sockets a hole in the bottom and a rubber washer to protect the whip.
Sometimes especially with American vehicles the whip socket is of wood screwed to the seat .
Whip sockets in nickel, silver and brass should not be used.
A basket for gloves and watch may also be attached to the dash board.