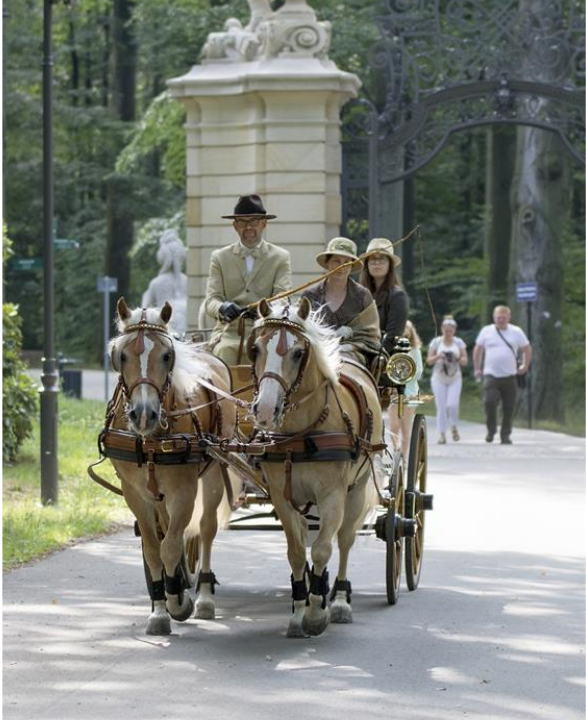 Kszias Castle, formerly called Fürstenstein was the residence of Hans Heinrich XV Prince Pless and his wife Daisy, Princess Pless. It is situated on a gigantic rock, hence its name, and overlooks almost the whole of Lower Silesia, the prince’s fiefdom. As the top of the rock offers hardly more space than that taken up by the castle and its gardens, it is always somewhat difficult to design a drive for the turnouts taking part in the CIAT.

The solution the organizers found for the last few events in Kszias was a circular drive repeatedly using the same roads and lanes. In order to escape the predicament this year they designed a route leading from the castle grounds to Swiebodzice, a small town nearby. It is a charming route in the shadow of the deciduous forest belonging to the park. There were however, two problems. The first being that the route through the forest was quite steep, demanding that the horses constantly had to hold back when walking down to the town, which in turn demanded a strenuous pull up all the way back. The drivers had to calculate a slower speed on these sections of the route. The second problem was the general motor traffic on the town’s streets. This needed to be taken into account, too. The routier’s PCs were situated in these streets and the show ring near the castle, nevertheless, the horses and drivers, managed these problems well. 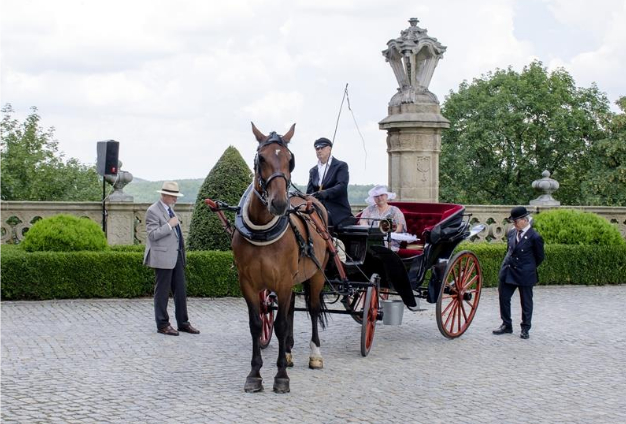 The presentation took place in the show ring again (pos. 1, judge Claudia Bunn (GB)), in the park (pos. 2, judge Hartmuth Huber (D) and in the formal garden in front of the castle (pos. 3, judge Enzo Calvi (I)).

The judges were very pleased to see that the level of turnout has risen yet again compared to the last few years. The organizers were also happy to welcome six drivers from Germany who had made the long trip to Kszias Castle, a sure indication of the attractiveness of the event.

There were also a few newcomers among the Polish drivers, a fact that pleased those who want to make private driving popular.

There were nice country turnouts, modestly presented but typical of their type. There were beginners who tried their best but made serious mistakes. The judges were glad to see that both critique and advice was readily accepted. Even if it is their task to improve the quality of the turnouts it was with a heavy heart that they had to mark down a fancy turnout that was a mixture of various parts and which had not taken into account the historic style and purpose, which should determine the character of every turnout. However, many other fine park and town turnouts set the benchmark for the turnouts presented in this event and were much appreciated by the public who clapped enthusiastically at the sight. 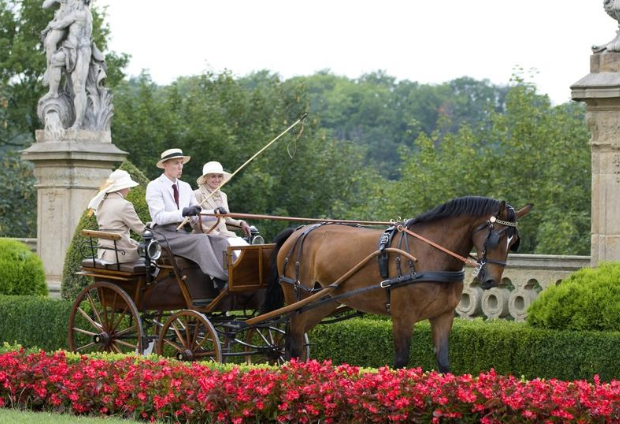 The Polish turnouts were characterized by impressive, well-trained horses and experienced drivers. Sad to say, there are hardly any carriages left that had been built in Poland during the era of horse-drawn carriages. It is difficult to understand why this should be so. The most comprehensible explanation is that most carriages in Poland were destroyed or confiscated during WWII and afterwards by Russian troops. It is a pity whatever the reason. However, the Polish drivers are very proud of the fine carriages they have found made by Schustala, a famous factory trading in the era of the K. u. K. Monarchie, (Imperial and Royal Monarchy)which, however, was situated in Bohemia, now the Czech Republic. Most of the fine carriages presented in this event were built by coach makers in Germany, Switzerland, Austria and Sweden, where their proud owners had purchased them. 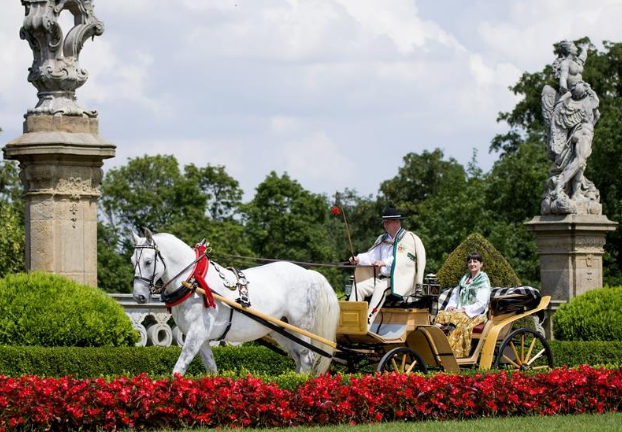 The cone driving was held again in the show ring near the park gate. Compared to previous years the course was less ambitious but agreeable. There were no sharp bends and no confusing sequence of cones. When the turnouts had been given their prizes in the late afternoon and driven several laps of honour, the sun had nearly set and its rays shone down producing a dramatic light like spotlights on a stage. As impressive as actors grown grey honourably, the turnouts presented themselves on a stage formed by the show ring playing the role of old Hamlet’s ghost appearing on stage as a witness to truth, i.e. the beauty of European horse-drawn traffic in days gone by. 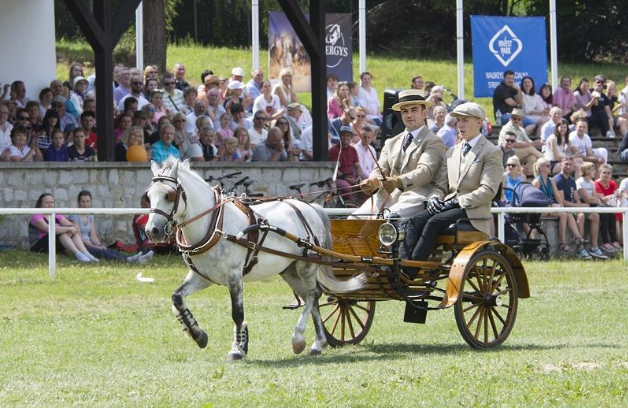 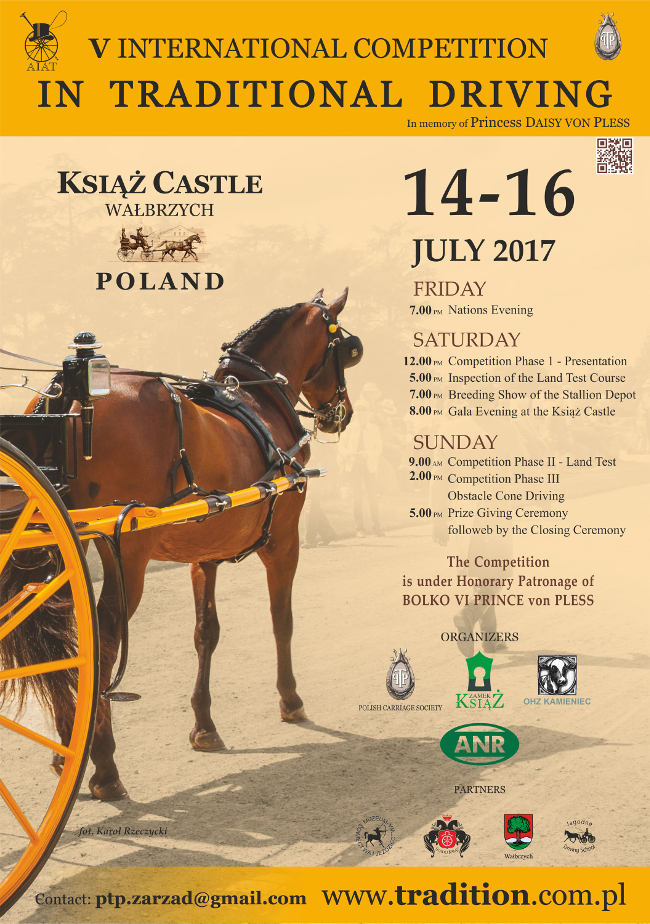